|| [look] Tommy is a young deku scrub, coming up to about half the height of an adult Hylian. He wears a shirt woven from flaxen reeds, a vest of grass, and a brown pair of trousers with green pinstripes, all rather tatty from overuse. He also has a giant acorn with the tip chopped flat resting on his bushy green foliage, giving the impression of a stovepipe hat. || 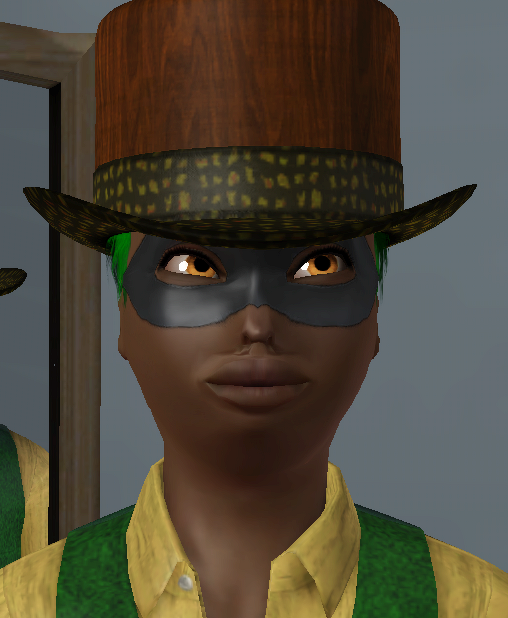 || [history] Tommy Twiggins has been an orphan for as long as he can remember. He grew up (as much as can be said he did, as he's still a child) in the Deku Kingdom in the Southern Swamps of Termina. It's a rather chaotic place to live, as many of the Deku Scrubs tend toward mood swings and easy changes of mind, and this extends to their royalty. Tommy learned early to ride the swiftly-changing tides of fortune as a rogue, taking opportunity where it arises and dodging the consequences of his brash actions. Said opportunities occasionally led him to Clock Town, where he proved just as capable of hoodwinking marks and outrunning the watch on streets of cobblestone as of dirt. ||

Thievery Rank 3: Tommy is talented and experienced in the fine art of getting into places and things that other people would rather not be gotten into. He can pick locks with a knife, move quickly and quietly, and "liberate" objects from people's clothing with a good chance of them not noticing until much later. ||

Tommy happened to be nearby when a warrior with a deadly curse was teleported into the Southern Swamp of Termina. He followed along out of curiousity and the vague possibility of an opportunity when Risa the Gerudo dragged the freshly-dead corpse of the warrior to the hut of Kotake the witch. Kotake was able to brew a potion that revived Esava, using a twig snatched from Tommy's foliage as one of the ingredients. Tommy reasoned that this means Esava owes him a life-debt, and Esava's sense of honor seems to make him at least partially agree with this assessment. n.n Unfortunately Esava seems to have things to do that he deems more pressing than fulfilling this obligation, and Tommy isn't about to let anyone who owes him something as valuable as a life out of his sight, so...people who meet them often have the first impression that Tommy is Esava's sidekick or something. >.>