Unlike the more slender members of his kind, Galte is a hulking figure. Clad only by a fused shadow covering his face. Standing over seven feet tall, his height is only exacerbated due to the fact he hovers gently over the earth. His large arms end inf fiendish clawed hands. Along his body flow several marking, glowing slightly blue. However over time, those have faded to red. Other changes include his hair twisting itself into dark colored tendrils.

He watches the world through a hole in the fused shadow he sports. His eyes are ruby red with a golden yellow sclera.

Without the fused shadow, he stand only a foot and a half tall. A small impish creature. His hands no long sport claws and his markings are fully blue.

A powerful Twili artifact, comprised of dark power compressed into a physical form. It easily corrupts those who lack the fortitude to command the power inside it.

Born in the realm between shadows and light, Galte was destined to be but a mere imp, a servant to someone above him in stature and power. He grew to lament his fate, envious of those who were born to greater fates around him and angry at those who used him like an object.

One of the countless duties he was to perform without question was maintaining the palace of twilight; cleaning and sorting the items within. He wasn't the only one tasked with this duty, but he was often left to the more undesirable wings of the palace. It was while cleaning a long forgotten wing that he discovered it. A fused shadow. Elegant and beautiful. It called to him, or he called to it. He wasn't sure what which was the case. Regardless, he wasn't hesitating.

The initial merger between them was... excruciating but that was how these things went, he supposed. No pain no gain, or something to that effect. Once freed of his former diminutive stature, he did the only reasonable thing and left the world of the twilight as quickly as he could. No one would take this power away from him even if it meant finding a new life elsewhere. That didn't seem to bad, after all, he had nothing to hold him back. 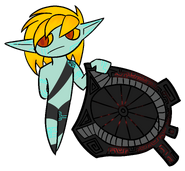 Galte without the Fused Shadow

Community content is available under CC-BY-SA unless otherwise noted.
Advertisement